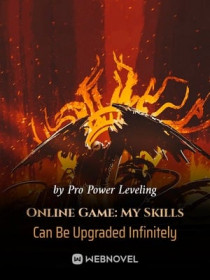 Online Game： My Skills Can Be Upgraded Infinitely   Author：Pro Power Leveling
Score： 0.0 (0Read)
It was the year 2021 AD. The game jointly developed by the entire world, “Heavenly Enlightenment”, was released. In this game, in-game coins could be exchanged for real money, which instantly attracted countless players from all across the world. Various nations around the globe also competed fiercely for the resources in the game. Lu Yuan was a player of “Heavenly Enlightenment. At the start, he received the SSS rank talent — Infinite skills upgrade! Fireball LV999: Fireball descends from the sky and rains destruction upon the world! Heal LV999: the Angel descends to revive ten thousand people! …… With his infinite upgrading talent, while others were still desperately trying to farm mob monsters, Lu Yuan had already killed the boss effortlessly. While others were still toiling to raise the favourability meter of NPCs, Lu Yuan was already sleeping on the same bed as the NPC queen. The other players all started to protest! “Report him, he’s cheating!” “Lu Yuan had severely affected the balance of this game, we strongly demand to ban Lu Yuan!” …….
None！
Label：
Download： All TXT
interactive： Vote Reward Flowers Eggs

Snow Flower came down from the cherry blossom tree and fell into a sea of flowers.

“Don’t you want your tree?”


Li Yi took out a magic sword in one hand, and a black shield in the other. It was useless to defend against Snow Flower. With the black shield, he was ready to use Avenger’s Shield Strike at any time. “Yo, he has a new weapon.”


Clutch King’s eyes lit up when he saw Li Yi take out his equipment.

Snow Flower summoned the cherry blossom petals to her sid..