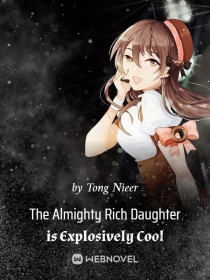 The Almighty Rich Daughter is Explosively Cool   Author：Tong Nieer
Score： 0.0 (0Read)
For more than a decade, she disguised herself as a weakling while preyed on the strong – Qiao Qing had never viewed reputation as an important matter. But people began to take advantage and purposely hurt the ones she cared about. Qiao Qing then decided to stop hiding her real self. An incapable good-for-nothing? Her natural genius IQ can explode your eyeballs! A lowly commoner? Her real identity made her someone who you are not worthy enough to be friends with! A feeble chick? Her skills in ancient martial art can result in you looking for your teeth all over the ground! A godly student, a godly Go player, a godly night rider, a godly martial artist… as her real identity revealed little by little, all those snobs who once viewed her poorly began to switch sides and attempted to please her. Qiao Qing shut the front door. No guests welcomed. She blocked those who wanted her for their own selfish demands, but she couldn’t stop this one evildoer from approaching her. Just like that, climbing over the walls and entering through the window became Jun Yexuan’s specialty. As the President of the Jun Corporation, he had enough to protect Qiao Qing her entire life. But what bothered him was that Qiao Qing was far too independent and far too capable. Without any of his help, she was able to successfully handle everything. Jun Yexuan became moody – he felt like he wasn’t needed! So, on a random day, a cry for help appeared on Weibo, “What do I do when the wife is too capable? Waiting for immediate responses – it’s urgent.”
None！
Label：
Download： All TXT
interactive： Vote Reward Flowers Eggs

“So what? What year are we in? Same-sex relationships shouldn’t be frowned upon. Both my exes were cool women just like her. But neither of them were as good-looking. Jun Yexuan, “….”


How did they manage to run into a lesbian so randomly?!

The girl appeared unaware of Jun Yexuan’s unhappiness and continued to ask Qiao Qing, “Can I?”


Qiao Qing didn’t get to speak when Jun Yexuan pulled her in.

With a stank face, he looked at the woman, “She’s a married woman! S..