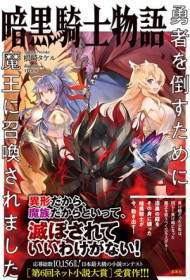 Ankoku Kishi Monogatari ~Yuusha wo Taosu Tameni Ma   Author：Nezaki Takeru
Score： 0.0 (0Read)
This legend tells the tale of the protagonist, Kuroki summoned to protect the demon king from the hero. Kuroki, unbeknownst to him, suddenly came to another world. He was summoned by the demon king, Modes. The territory which the demon king overrules was in the midst of being destroyed because of the hero. He had no choice but to bow before Kuroki. “Please save us, Savior Dono!” Kuroki nodded, deciding to save the demon king due to an unexpected turn of event.
None！
Label：
Download： All TXT
interactive： Vote Reward Flowers Eggs

We were heading north by riding on Aspidochelone’s back.

The ice spirit’s power was really strong in the icelands of the north.

The cold wind that blew to the grand central continent came from there.

The krakens were living around this ice island.

And we were currently heading to that very place.

It’s been three days since we departed from Nosoi, the orc’s country.

So far, its been smooth sailing journey.